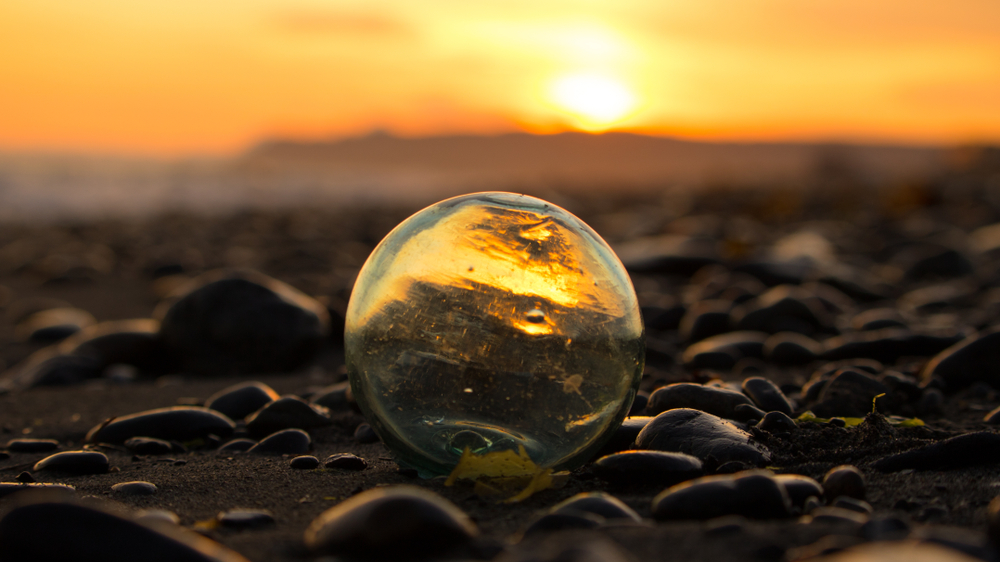 Today is the day my father will be buried at sea.

My earliest memories of him include his love of the sea. As a child he lived with his grandparents on the Oregon coast. He had great memories of scouring the beach for Japanese floats, one of which, he recalled, was 5 feet in diameter.

When he was 16, he joined the Navy to fight in WWII. It was the preferable alternative to his home life.

When I visited Arch Cape, Oregon, in the 1960s I remember Japanese floats decorating the garden of my family’s ocean-front cottage. I was fascinated by them. There was one in particular that was truly a mystery.

It was small, about 6 inches in diameter, and half-filled with sea water. Yet it was completely sealed. To this day that float, which hung over the bay window in my childhood home in Virginia, is half-full of water. Salt sediment has settled at the bottom.

“How is that possible?” I say this out loud, smiling broadly, whenever I pause to admire it. It’s so beautiful. But like my father, and all humans, it’s flawed. That water isn’t supposed to be there. But it is, and that’s what makes the float so unique and so beautiful.

The flaw is its most precious characteristic.

We somehow believe that flaws are shameful.

I wish we weren’t conditioned to believe we should be perfect. That must be why I am drawn to that old Japanese float.

It’s a happy circumstance that I have this float to remember my father by and that I have fallen in love with the Japanese concept of wabi sabi, which is in part about finding the beauty in imperfection.

The float is perfectly imperfect, as was my father. He had a complicated and difficult childhood, served in WWII and witnessed much he couldn’t talk about. He was troubled, and funny, and curious, and smart, and self-absorbed, and grumpy, and playful, and critical, and too honest, and too dishonest. He carried a lot of pain and a lot of joy.

His life was messy.

In the last year of his life, he and I connected in a way we never had before. We played a game together, long-distance, and got so absorbed in it, we forgot who we were without the game.

We forgot the messy bits. The trauma he caused. The heartbreak I caused. The scars I carried. The parts of his personality that were shaped by his horribly abusive father. The coldness he could project. The hurt I still carry to this day.

We played the game with spontaneity and glee. We laughed. We impressed each other. We worked together to solve our puzzle. After all these years, I realized we were kindred spirits. Our brains worked the same way. We were both playful. We even discovered we both loved lost-at-sea stories.

When I last visited my father, just before COVID entered our national awareness, he was 93 and having a health crisis. I helped take care of him for a month. When I was leaving his house, I snuck into his bedroom where he had a bookcase full of his favorite books. I slipped the first volume of his favorite sea-adventure series into my bag and tiptoed out.

I know. He probably missed it. My stepmother mentioned she couldn’t find it. I stayed silent. I allowed my messy feelings and took the one thing that I knew would help me deal with his inevitable passing.

I allowed myself to be imperfect, selfish, and ok, a thief!

Today, my extended family will be taking Dad’s remains out to sea in a schooner. They have his ashes in a salt urn. He will rest in the tides of his beloved ocean.

I will sit here in my living room with the Japanese float in my sightline and read Chapter One of his favorite book from his favorite series, while sipping his favorite beverage (coffee).

My messy soul is hurting, and that’s a beautiful thing. I will feel my feelings today. Have a snotty cry or three. Be a mess. And feel grateful for the man who shaped me in every way, good and bad. I am imperfect, and yet lovable. Just like him.

← Are You Too Busy to Be a WLS Success? Escape The Dark Side of Overeating →