Escape The Dark Side of Overeating 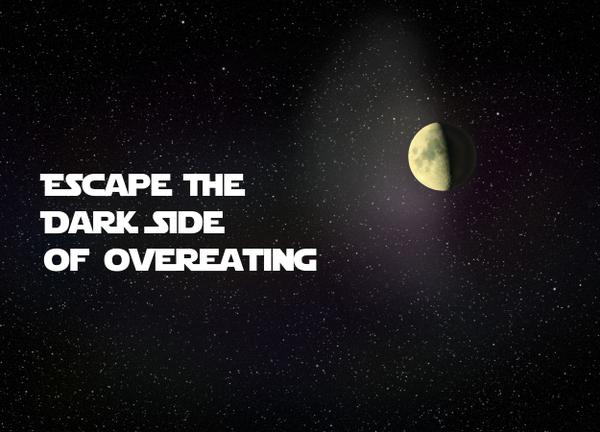 Long ago, in a galaxy far, far away, Luke Skywalker looked into Darth Vader’s eyes and found the good in his father.

Luke said, “The Emperor hasn’t driven the good from you completely.”

Vader denied him, insisting, “You don’t know the power of the dark side.”

This scene reminds me of the many times in my life I have endured the loving words of a friend or family member who sought to convince me they believed in me – saw the good in me – and they knew I would overcome my obesity.

Of course, like Vader, I would defend the darkness, saying, “I’ve tried everything, but nothing has worked. You don’t know the power of this disease,” or, “I just don’t know if I have another weight loss in me. And besides, I can’t stop overeating. I’m a failure.”

I Could Not See What Others Saw in Me

You see, as I suffered in my illness, I felt so much shame and self-loathing I could not see the part of me others saw as good.

I could not see my courage, despite my years of valiant attempts to overcome my problem.

I could not see my perseverance, as I painstakingly tried every diet known to man.

I could not see my honesty, as I continued to seek help from professional after professional by admitting my problem and asking for help to overcome it.

I could not see my value, as I tirelessly raised my son and took care of my dying mother.

I could not see my attractiveness, as I lived with a man who loved me unconditionally.

Writing Down my Story Improved my Vision

I did a lot of journaling during the months leading up to my bariatric surgery.

Writing down my thoughts and experiences helped me to understand how inaccurately I had viewed myself over the years.

I had been thinking I was a miserable failure – a bad person who couldn’t control her behavior. But, after thinking and writing about it, I realized I was looking at myself and my life in the wrong light.

I also realized that if I continued to think negatively of myself, I would have a much harder time being successful after my obesity surgery.

The Most Radical Change of All

Of course, the most radical change I needed to make was how I viewed myself, how I framed my story.

It took Vader a long time to be able to admit his own goodness.

Likewise, it has taken me nearly a lifetime of work to get to the point where I can see my courage, my good, my value.

I Am Not the Miserable Failure I Thought I Was

I am the survivor and the warrior, valiantly pushing forward. Nothing is going to stop me, and I have been proving that all my life.

Obesity Hasn’t Driven the Good from You, Either

While most people who struggle with obesity see their lives as one failure after another, we are not failures. We are people who persevere, seek answers, try new tools, and succeed.

The success doesn’t lie in the numbers on the scale. It lies in our decision to get up one more time than we fall.

Ultimately, Vader was able to escape the power of the dark side, because of the love he received from his son.

WLS patients can escape the dark forces by embracing the love in their lives, and more importantly, learning to love themselves unconditionally.

It is from a place of love that we can see the good in ourselves and what we have set out to accomplish.

← Messy Souls Why You Shouldn’t Think Things Through →